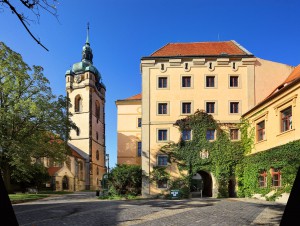 Mělník Chateau, originally named Pšov, is situated above the confluence of the Elbe and the Vltava, above the river and the sloping vineyards. The name is derived from the name of the Slavic tribe of Psyovians and has been preserved in the name of Pšovka Stream and the former village, nowadays urban area of Pšovka.

According to the Chronicle of Bohemians by Cosmas of Prague, the last prince of the Psyovians, Slavibor, married his daughter Ludmila to Bořivoj I, Duke of Bohemia. Legend has it that Princess Ludmila often stayed here and raised her grandson Wenceslaus who cultivated vine at the chateau. St. Wenceslaus is depicted in lunettes by the Czech painter Karel Škréta on the first and second floor of the chateau.

How Mělník got its name

The chateau was originally wooden, but it was probably replaced by a stone mansion at the end of the 10th century, the remains of which are preserved in the southern tower part of the western wing of the chateau. Princess Emma, ​​the wife of Boleslav II, held the estate at that time and the name of Mělník, ‘Civitas Melnic’, appeared on her silver denarius coins for the first time.

The chateau and the town were then held by the wives of important Czech rulers. Elizabeth of Bohemia stayed there for a long time in the days of disputes with her husband, John of Bohemia. It was during the time of the last Přemyslids in the second half of the 13th century when a great Gothic castle was built. 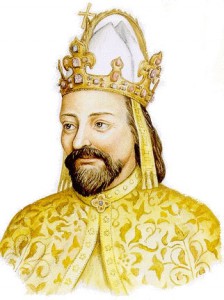 Charles IV declared Mělník a royal dowry town with many feuds and contributed to the development of wine-making in the Mělník region when he imported vine from Burgundy. The last wife of Charles, Elizabeth of Pomerania, settled in Mělník until her death in 1393, and it was probably her who had a castle chapel built, then dedicated to Saint Louis, nowadays to St. Ludmila.

The wives of George of Poděbrady were the last to live there. Late Gothic adjustments of the castle were made around the 1480s when the castle gate was built. Mělník was held by George Popel of Lobkowicz as a feud of Rudolf II and it was apparently when simple sgraffiti were made on the west wing in the courtyard.

The chateau became quite desolate during the Thirty Years’ War and was pledged to Heřman Černín of Chudenice in 1646 and he made it inhabitable once again. Heřman Jakub Černín bought the chateau and the estate of Mělník from Leopold I, Holy Roman Emperor, only in 1687 and he had a new building and the southern wing of the chateau built from the foundations.

The former owners gradually preferred the nearby Hořín Chateau during the 18th century, and Mělník remained primarily the administrative centre of the estate.

The last Černín heiress to the estate, Marie Ludmila, married Augustus Antonín Josef (Eusebius) Lobkowicz in 1753. Since then, the Mělník branch of the Lobkowicz family owned the chateau until 1948 and it was returned again in 1992.

Rare paintings and furniture from Lobkowicz Collections were installed in the chateau and a wine museum was founded there at the end of the 19th century. Jiří Kristián Lobkowicz exchanged a brewery in Pšovka for the vineyards of Leopold Lobkowicz in Dolní Beřkovice in 1931.

More about the House of Lobkowicz